Because of globalization, Europeanization, and interdependence, it has become more difficult to see developments in contemporary France in a purely national context. In response, the journal French Politics is focused on the roles of political institutions, political behavior, public policy, political economy, international relations, public administration and public law as these factors relate to France.

French Politics is an international, peer-reviewed journal that promotes the study of contemporary and comparative French politics, policy and society. The journal publishes papers that incorporate the French case into more broad comparative and cross-national analyses, and that use the French case in theory-testing and theory building.

Go to SpringerLink to see if you have access

Receive updates for all new issues published in French Politics. 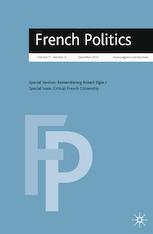 Special note from the editor

French politics at 17: a tribute to Robert Elgie

Find out more about how to publish in this journal